skip to main | skip to sidebar

The patient is doing well

Aldi is all good again. She was walking normal again after the third day. I am still trying to keep her quiet but she is eating and drinking again and I am happy.
Posted by gullygunyah at 8:11 AM 3 comments:

While I was posting some of my trip photos yesterday morning I noticed my dog Aldi had gone lame. Immediately I suspected a tick, searched and found it. I've removed them myself in the past on my other dogs but they were not affected at that point.
I didn't dare risk self treatment at this point as she had lost control of her hind. So I took her to the vet who was anxious to point out that treatment would cost from 800-1000+. Which at this stage was unaffordable because I don't trust plus quotes. So I said I'd have to take her home and hope for the best. At least they gave her a sedation and got the tick off.
Then they suggested leave her for a days treatment for 600 dollars. What could I do she's my buddy so I said ok. I've got her home now and have to keep her quiet for a month. Which at the moment is easy as she is still unable to walk.
But that kills any plans to go to the property this weekend. 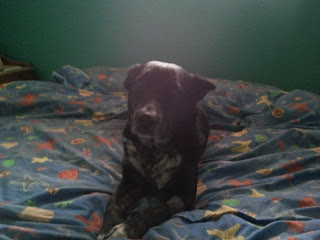 Posted by gullygunyah at 7:31 AM 2 comments:

Well back to real life. It was fun escaping for a while but home is where the heart is they say. Hopefully I will be off to the property this weekend. Although this blog is essentially about it I will post some pics from my trip.
It certainly opens your eyes when you travel to another country and experience the cost of living there. Overall, it reinforced my feeling that we are being cheated here by big business and governments.
Despite having many tunnels and road infrastructure I never saw a toll road in Berlin. Alcohol is ridiculously cheap because the only tax on it is vat. Food was cheap also. My jaw dropped the first time I paid at the checkout at the local supermarket, even with 19 percent vat compared to our 10 percent. I was looking constantly at comparisons in costs and if they weren't cheaper then they were at least equal in cost.
Being such a cold climate it goes without saying double glazing is essential. I was amazed to see aluminium double glazed windows for 69 euros available in several sizes for the same price. You still have to buy a steel frame which is secured into the frame or concrete but try and buy just a small aluminium window here for that price let alone double glazed. They are really nifty too in that when you turn the handle one way they swing and the other way they tilt. I could go on but too many words and no pictures can become dull. 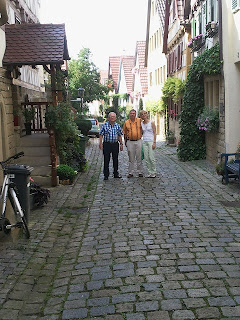 This was an old town called Marbach dating to the 1200's. Pictured is Dad, Wolfgang and Birgit 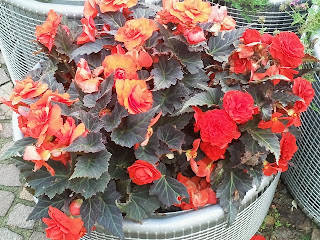 I was bedazzled by the vivid colour of these potted flowers. And enjoyed the colour of many a windowbox. 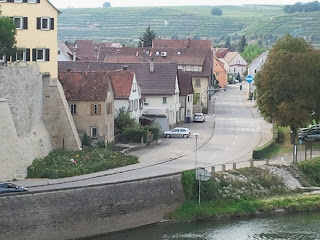 Another town in the South called Laufen. 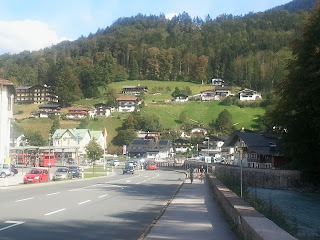 The arrival point in Berchtesgaden. Train and Bus depot on left and hotels, guesthouses on hill in background 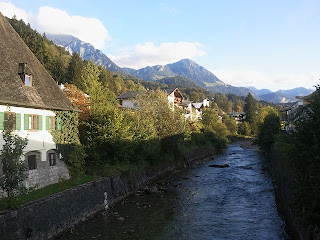 Looking from one side of roundabout in centre of Berchtesgaden. A view to behold. 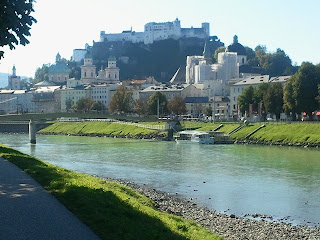 We went to Salzburg on the most glorious day weather wise. We regretted later not using that day to visit OberSalzburg. 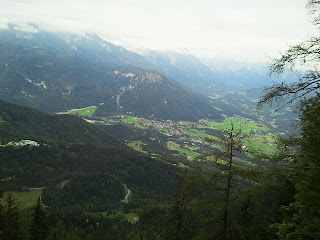 We were lucky in a way that we got there early because the cloud came rolling in soon and spoiled any chance of paroramic shots the day we visited OberSalzburg and the Adlers Nest. 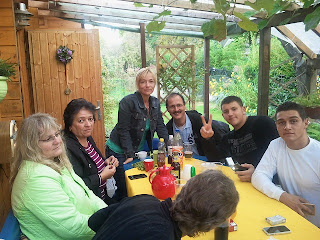 This was a a great get together in the Australian traditon. With Grilled chicken and sausages and plenty of Petra's perfect potato salad. This was a summer house which can be bought quite cheaply. It is not much more than a garden shed turned cottage but the gardens were beautiful and they are very affordable.
You will mostly find these community gardens along the rail lines. 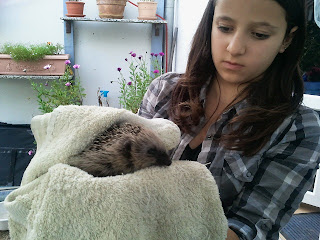 Celina with an Igel. Now that gets confusing when saying it in English. As it's obviously not a bird. I guess
you could say it is like our echidna except the hair is finer but spikey none the less. So no cuddling too close, which is a shame as they are so cute. 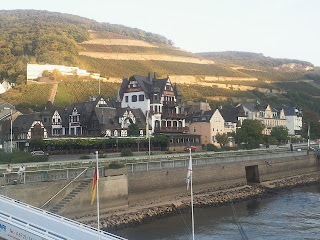 The Rhine is such a beautiful place. Three things I can say, lots of vineyards, castles and stone walling. 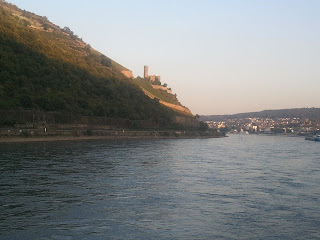 We did a 2 hour trip from St Goar to Bingen. There was a picture to be had where ever you looked. 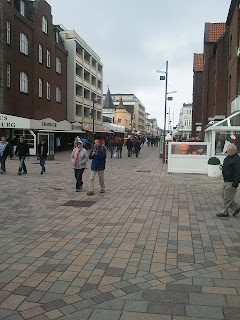 This is Westerland in Sylt an island just below the Danish border. Very clean looking and it had it's own distinct style. 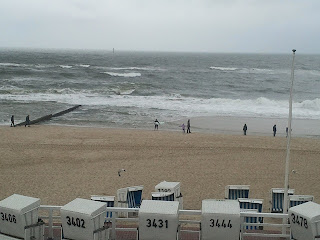 The North Sea wasn't very inviting and I was ropable about a charge to go on the beach so I just took a picture or two over the wall. 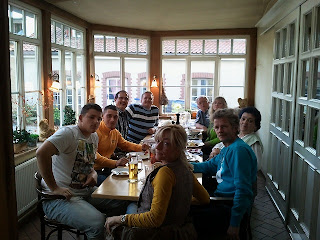 The last evening before we travelled home. It was a nice time. 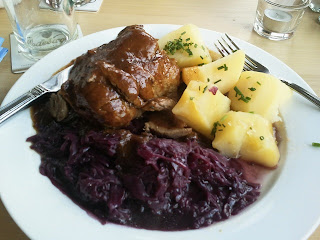 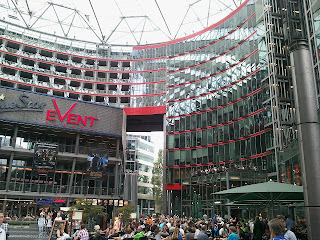 The new Sony Centre in Potsdam Platz, Berlin. Many cafes and eateries at ground level and offices above. 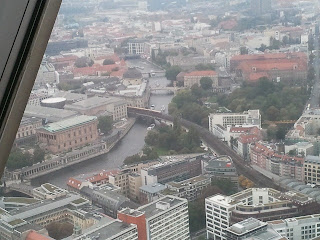 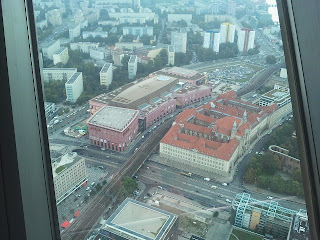 Two views from the tv tower at Alexander Platz. Nice Restaurant there as well. The floor rotates and you get to take in 360 degree views over about half an hour while dining.

Posted by gullygunyah at 1:46 PM No comments:

We are here. Well we've been here since last Friday but today is the first day we spent as tourists. And of course any tourist to Berlin has to see Brandenburg gate. 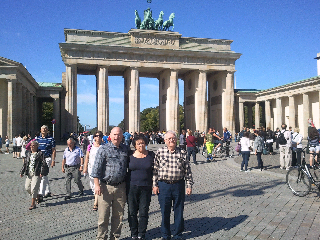 I've just installed blogger on my galaxy s. I'm doing a test post to see how easy I can blog on the go. 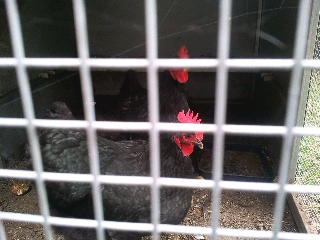 Posted by gullygunyah at 8:41 AM No comments:

Labels: my girls at home

Things are happening in twos at the moment. I found another dog skull and some bones on the inside of my fenceline. A little smaller than the last. How strange to be finding these all of a sudden. Also spotted a small echidna near the dam and then later that day a bigger one in the front paddock.
I also finally got the courage to take the tractor down the back and found I had reason to be hesitant. The ride down was ok as I always suspected but coming back up was hairy as can be. I was concerned it might lack the power and stall halfway up which would not be good with the brakes as they are. However the scariest part is the front wheels lifting and going sideways when you want to go straight. Fortuantely a clump of ground blocked them and the rear wheels pushed forward enough in time to make it up in one go. You seriously would not want to stop, roll back and try again.
I wish I had pictures for show and tell but I don't. It was good to clean up the lower parts.
I'll be away for a while now. I am off overseas for 5 weeks after 10 years since the last time. I am sad and not even looking forward to going at the moment but I have always wanted to do this trip with dad and as he is in good shape now for 76 and he is concerned for his sisters health, it is best to do it before he is not able. I know once we take off and my mind is focussed on the trip I'll be happy. But Gully has a draw on me so strong now, I can't wait to be back.

Posted by gullygunyah at 7:20 AM No comments: 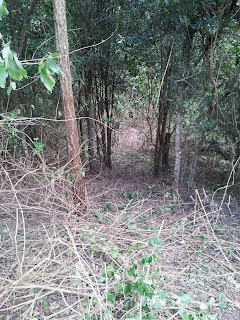 Cleared fenceline down to first gully 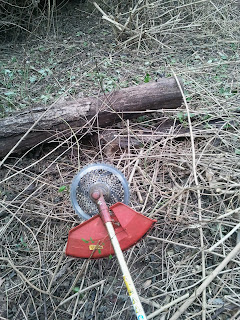 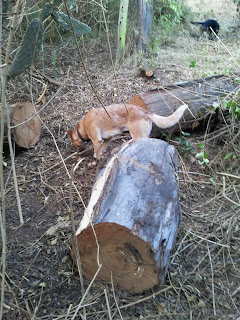 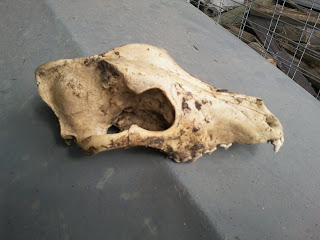 Dog skull. Could this be Ruby?

Posted by gullygunyah at 5:29 AM No comments:

gullygunyah
I live in Brisbane Qld. In the last 10 years I feel Brisbane has outgrown itself and me. High density housing and traffic and roadworks has left me looking for wide open spaces. So in 2007 I purchased a bush block to escape to on weekends and hopefully move to in the not too distant future. I call this place Gullygunyah. There is a humpy on a hill between two gullies and that's how I came up with the name. Gullygunyah is at pierce creek. about 10k's north of crows nest at the northern end of the darling downs. It is a 36acre block split by a road into 25 and 11 acre lots. At the moment I am focusing only on the 25 acre part where the humpy is.